This book is Grant Cardone at his best. If you follow Grant in any way shape or form, you probably know a ton about what’s in this book already. The benefit of the book is that it’s all in a condensed format and laid out in an orderly fashion. Grant’s trademark energy and enthusiasm keep the momentum going and there isn’t any down time in the entire book. Buckle up. 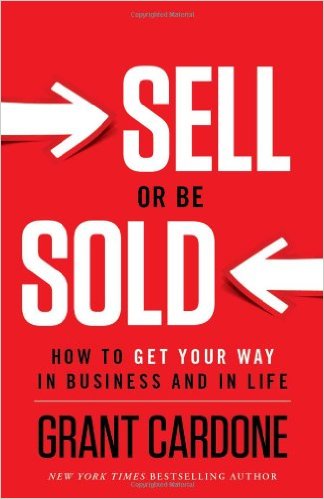 52 Weeks of Book Reviews. Week #22 – Sell or Be Sold: How to Get Your Way in Business and in Life by Grant Cardone

Grant gets the ball rolling by letting us know that this entire book is really just one of the things that Grant is great at, it’s re-purposed, repackaged, updated and improved, but it’s based a lot on his first book- Sell to Survive.  Grant regularly takes his content and figures out a way to double or triple dip on the business opportunity. His videos and webinars can be paid for Live, bought it the entirety after the fact or often included in a package deal with other content. He is indeed always selling, but it’s also how he sells and how he leverages his efforts that are important.

Grant is a PR, Marketing Machine. His work ethic is ridiculous to most and he talks a lot about that in the 10X rule. In Sell or be Sold he casts a wide net by not just appealing to the Sales Industry which I’m sure is a good play for him and also really paints the picture for people in the Sales world to realize that it’s OK, in fact it’s good to be immersed in the constant effort to be better at Sales.

We often talk about “Always Be Closing”, (a phrase made popular by the movie “Glengarry Glen Ross”), but Grant takes pains to make sure that there is a difference between Selling, and Closing. Two different parts of the process but both are vital. Selling is all about building up the momentum, excitement and trust while Closing is about actually signing on the dotted line.

Sales is everywhere. I had to sell the guy next to me on the on ramp today on letting me into the lane. I had to show him my intentions and make it public by turning on my blinker. That didn’t work so after foreshadowing that I wanted into that lane I had to show my determination, my relentless will to get into that lane by just putting the nose of my car into that lane 6 inches in front of his car. He saw that I was determined, he saw that I was committed and that I wasn’t going away. He could have decided that he was more committed to not letting me in. He could have honked his horn and tried to gun his engine and swerved a little to go around me, but he didn’t. He wasn’t sold on my blinker. He wasn’t sold on my speed change to try to give him time to make space for me. He wasn’t sold by how long I hung out it that space. He was only sold when staked my claim on 6 inches of space. It’s always Sales.

Selling is a way of life. It makes the world go around and it’s a vital role in the economy, the ecology and the sociology of the planet. Commerce is good. If commerce isn’t going away, we should all just get better at it.