Gary Vaynerchuk is a phenomenon. His legion of fans are loyal and loud and if you haven’t heard about him before now, (or more likely you’ve heard about him but just didn’t reach out to consume any of his material), it’s time to dive in and see what it’s all about. 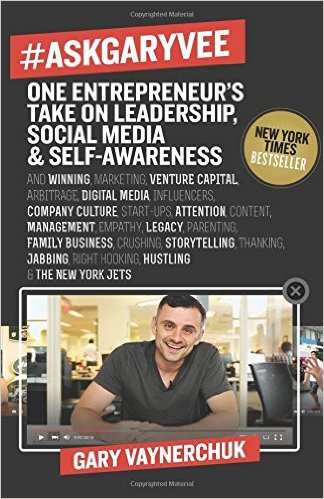 @garyvee is his twitter handle and he’s a social media hustler. He runs a couple of massive businesses but it’s his personal brand that really packs the punch. I don’t know how you value the personal brand of someone like Gary but he’s definitely building his up. He’s always online in some way shape or form, the amount of content that he pushes out is amazing. I’ve watched just a hand full of things he’s on and he’s simultaneously filming a Facebook Live video while doing a YouTube video that’s skewed for a different audience and can be cut and edited while the Facebook deal is raw. He’s multi-streaming himself, he’s recording some meetings, but guess what? He was going to be having those meetings anyway!

He’s always on point, he’s always on and he’s always hustling. He’s got a tendency for some raw language but I accept his language just because it’s who he is. The show has some great insights into his business and the book is basically the show just revamped into a longer format. It’s not just a “Best Of” book though, the new material is significant and it’s more up to date because he’s had time to go through and thing about the questions that compromise this book.

Basically there are a series of questions posed to Gary that allow him to go off on a series of tangents and he can easily go from topic to topic without having to stick to too much structure. The nature of the questions were grouped together, but these were culled over a period of time and this is sort of the readers digest version of #askgaryvee . It’s well done and entertaining. I didn’t watch his show previously but I had seen some of his short clips and motivational instagram pictures. I’m in the motivation game, I need to wake up every morning with massive purpose in order to keep going forward and so I thoroughly enjoy reading this stuff, I thrive on it.

I’m reading a book every week this year and I’m a little upset that now I can’t get my hour or 2 of Gary in everyday moving forward. I’ll have to adjust my schedule to find the time to touch on Gary’s work again. I’ve made it my mission to read as much as possible this year, but that also means that I once I find someone that really interests me I’m already moving onto the next adventure. This year I’m impressed with the Napoleon Hill, Grant Cardone,  Mike Weinberg and Gary Vaynerchuk, Almost done with the first half of the year,  I hope the second half is just as entertaining and informative.