This is a classic parable. Some people love it, some people hate it but it seems to always make an impact. The book is closing in on 20 years and still seems relevant. I suppose that’s the reason it’s already a classic. The story itself has a timeless quality that should endure for many more years. 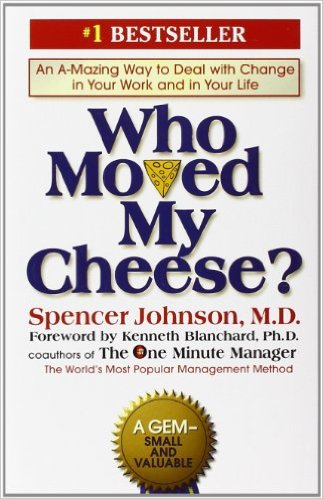 52 Weeks of Book Reviews. Week #28 – Who Moved My Cheese?: An Amazing Way to Deal with Change in Your Work and in Your Life by Spencer Johnson

I was certainly aware of this book before picking it up and deciding it would be one of my books this year. I had a faint idea about the content and meaning of the book as well, I may have seen the video or talked to someone who had already read it. I can’t really identify how I had previously interacted with the content, and that actually speaks volumes to the saturation levels of the book. “Who Moved My Cheese?” is so commonly known that I can’t even identify where I learned of it first. I had the book on my desk this week and 4 people saw it there and commented on it. 3 were positive recommendations and the 4th hated it, that seemed much more appropriate after reading the book. I’ve thought for years that the only constant was change, but I’ve been terrified of it over and over again and clearly, I’m not the only one.

It’s a parable, so it’s a simple story with far-reaching meaning. There are 4 characters that are meant to represent the public at large and how we respond to change. It’s easier to pretend that we are some omniscient being that can see the story unfold from afar than it is to realize that the book is about our own lives. From our view over the maze, it’s easy to pass judgment and recognize the good behavior vs the bad, at least how the author describes and frames the behavior. Change and how we handle it is important, we can’t wallow in the past and we should anticipate change on a regular basis. The book seems more like common sense that earth shattering information, but then again I was already vaguely aware of the content and already agreed with the message.

If i were a “Hem” from the book, I’d probably disagree aggressively with the book, the content, message, and delivery. It’s easy to make a case for the importance of stability and consistency. If it’s not broke, don’t fix it.  Stay the course and find success. Determination against all odds will prevail. There are a lot of sayings that expound on the basic principal of steadfastness. I could also see this book being used as a scapegoat by those that want to make reckless changes. Do we go “all in” on these principals or do we subscribe to the “everything in moderation” safety net. The answer is that I don’t know. You’ll have to decide yourself. I do know that the obsessed are the ones that see the massive success that most people dream about. I think the really successful are the ones that make their own cheese in the first place and then figure out new ways to sell it to everyone else.