There are few times when I don’t appreciate a good wake up call and Larry delivers them like no one else. This is the 3rd book of his that I’ve read and they all have 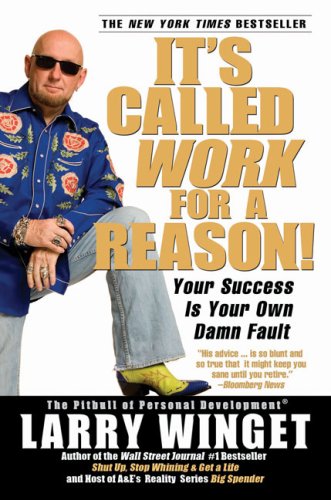 the same no nonsense style that I’ve come to enjoy. He’s brash and he makes no apologies so if you are easily offended or too “high brow” to get down and dirty then you probably wont want to read this book.

Larry is the ultimate in self reliance and self accountability. It can come off a little over the top sometimes but he’s still authentic and so he pulls it off. He really is just over the top and that’s probably a good thing. It’s what makes him special, he does and says things in a way that normal people wouldn’t. He’s unconventional, but he also gets to make unconventional money too I suspect.

His language is plain and his stories are easy to relate to. He’s an every man’s, man. Larry has had trials and tribulations that you can tell are for real, which makes his stories and recommendations all the more convincing. This dude has been bankrupt, he’s been broke, he’s been where a lot of people have been in the last decade and he’s come out of it smelling like roses.

A lot of these self help or inspirational books have similar messages, you just need to choose the voice that resonates with you. Larry is a dude that a lot of people would want to sit down and grab a beer with, his books feel fresh and entertaining even if the ideas aren’t new, the stories are.

Do you need a wake up call? Do you play the victim too much? Is it never your fault? Is the man holding you down? Do you need the swift kick in the pants to get motivated? If the answer is yes, then pick up this book. Laugh a little at the stories but look for the truth in them.