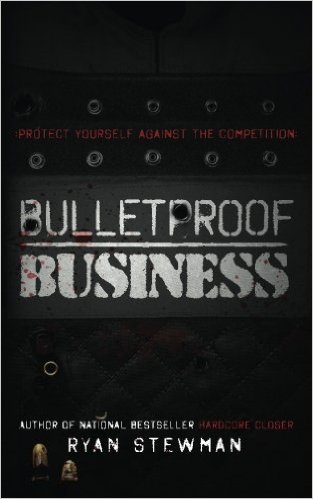 are only a few times while reading this that I remembered that this was a business book.

For the most part Ryan is just telling a story about how some interesting stuff happen in his life. It’s kind of like a train wreck in the sense that I just couldn’t help myself from looking at it but it made me squirm a few times and I felt bad for anyone caught in the wreck.

52 Weeks of Book Reviews. Week # 8 – Bulletproof Business: Protect Yourself Against The Competition by Ryan Stewman

Just because I forgot it was a business book a few times doesn’t mean that there weren’t valuable lessons to be learned. Ryan’s approach in this book is to help the reader learn from his mistakes. He’s taken the long way around and still ended up ahead of most people in the race for the biggest bank account balance. He’s taken some risks and enough have worked in his favor that he’s in a position today to continue to gain respect and offer advice. He’ll willingly tell you that his time and advice are worth a lot of money these days.

It’s hard to believe how many crooks are in this world and unfortunately salesmen make up more than their fair share of those white collar criminals. Salesmen are likable and they have the ability to craft a story that makes sense of any scenario, it’s no surprise that a lot of great salesmen have been caught in unfortunate circumstances. Grant Cardone openly talks about a partnership he once had where the partner and he split and he calls that partner a crook. We all know about the Wolf of Wall Street, AKA Jordan Belfort, and the things he did while in the midst of some great “sales”. It’s no surprise then that in the world of sales even great salespeople get sold on someone from time to time, we all want to believe. Ryan was sold on some business partners, he’s been sold on a few women, he was sold on the trappings of the white picket fence and the required role he was “supposed” to fill. He was sold on who he should be and then he tried to sell other people that dream too.

The worst part of being a salesman is trying to sell something you don’t believe in. Ryan talks about selling and training something in the insurance industry but he really wasn’t into it. He wasn’t sold on it. For the first 3 quarters of this book Ryan wasn’t sold on who he was and it manifested itself in insecurities and bad decisions. He couldn’t rise above the fray because he didn’t know who he was and had no idea how to get out. If you aren’t authentic to yourself  it’s hard for anyone else to buy into you.

From a technical standpoint Ryan isn’t exactly a wordsmith but he crafts a story that keeps you interested. He keenly advertises his services and asks for the business in the pages before, during and after the story. He ends his chapters with a quick teaser about the next chapter to keep you motivated to get through the whole thing.The paragraphs, pages and chapters are short and in the sales world we work with a ton of people with shorter attention spans. It’s not our fault, we just crave the action and we’d rather be talking to people and learning on the go than actually sitting down and doing the work. Ryan references this behavior in the book, but he knows his audience too. Ryan is 100% himself and that’s often in expressed in language that might be considered crude. I don’t speak the way he does, but I don’t judge him for it just like I don’t judge a New Jersey accent vs an English accent. The message is important and maybe his message will actually come across to more people in his terms than someone prim and proper who doesn’t have the ability to connect with most sales people.

As human’s we are all sculpted by our past. His has brought him to the point where he has firmly taken the bull by the horns and refuses to let the bull win. I admire his tenacity and effort. He talks about doing the work and I put Ryan in the category of DOER. He does stuff. Period. Most of us just talk about it, but it’s too much risk to put ourselves out there. Ryan put in the effort and now he’s got the skills, to have both is a sure fire way to gain success. Effort X Skill = Success.

If you walk a mile in another man’s shoes maybe you can take the short-cut that Ryan is offering. You can get a glimpse into his history and perhaps you can come to the same conclusions that he did. You are accountable for your own success and failure. If you fail and it was someone else’s fault, think again because it’s your fault that your fate was in someone else’s hands. Take control and raise the minimum expectations of your life.

You can start buy buying his book and checking out his website. Go ahead and and check him out at www.clyxo.com/closer.

(FULL DISCLOSURE- Ryan sent me a copy of his book for Free, but I’ve paid to see his video’s, listen to his podcasts and read his sales strategies. He didn’t ask me to review his book, I just happen to be a member of his Facebook group and I’m on his email mailing list.)