KISS. Keep It Simple, Stupid. This book is a nice spin for the classic Hard Work Beats Talent when Talent doesn’t Work Hard. There is a giant fear of failure in most sales reps 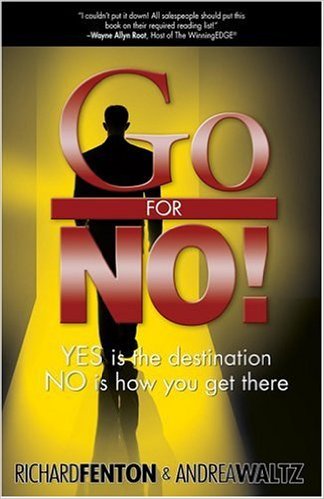 and it limits the amount of risk that they will take. This is a classic mind flip that creates the scenario where NO is Good.

52 Weeks of Book Reviews. Week # 9 – Go for No! Yes is the Destination, No is How You Get There by Richard Fenton & Andrea Waltz

I’m a strong believer in the SweatAbility factor (Effort X Skill = Success) and typically in my own experience the hustlers are the ones that put in the strong effort. They work harder, longer and have strong visions of what they are working towards. Those guys are the ones that often get the trophy’s at the end of the month, but sometimes it’s someone who just has to struggle to stay at par. I try to take those guys and increase their skill level, I work on their closing skills, listening skills, mirroring skills and general sales I.Q. I stand by that assessment, if someone’s work ethic is already a 9 out 10 and I double their sales skill, they will double their income.

This book focuses more on the Effort piece of the puzzle, which is something the 10X Rule by Grant Cardone does as well, but I think this book might be more dangerous in some industries than in others. There is a message in the book that encourages massive prospecting, which I am on board with, but the book initially also seems to reward a low conversion ratio or at least it could be interpreted that way. The surface message would seem to just take massive leads and get through them and you’ll probably find a few “lay down” deals and out perform your competition by just sifting through your leads faster.

The hidden message is in the last chapter. The No’s that you get don’t all get thrown away. The same leads can and should be reused and in fact most customers will say No 5 times before saying Yes. That means that by prospecting more often and calling on your own sales leads multiple times you’ll increase the number of times you are told No, but eventually your conversion ratio of sales calls to confirmed clients will actually improve. Let’s face it, everyone you talk to buys from someone right? If you are persistent enough that person can be you.

Talk to more prospects. Get to the point. Don’t burn bridges. Follow up relentlessly. Ask for the business so you always know where you stand. You will both outwork AND out smart your competition by following these rules. The Author’s might disagree, but I think a salesman’s favorite word is still Yes, but I’ll concede that the second favorite word is No. Look for the No in every sales call and you won’t be running away from prospects with fear of rejection, you’ll wear it like a badge of honor on your way to the bank.